The history of the quilt

The Quilt was conceived in November of 1985 by long-time San Francisco gay rights activist Cleve Jones. Since the 1978 assassinations of gay San Francisco Supervisor Harvey Milk and Mayor George Moscone, Jones had helped organize the annual candlelight march honoring these men. While planning the 1985 march, he learned that over 1,000 San Franciscans had been lost to AIDS. He asked each of his fellow marchers to write on placards the names of friends and loved ones who had died of AIDS. At the end of the march, Jones and others stood on ladders taping these placards to the walls of the San Francisco Federal Building. The wall of names looked like a patchwork quilt.

Inspired by this sight, Jones and friends made plans for a larger memorial.  A little over a year later, a small group of strangers gathered in a San Francisco storefront to document the lives they feared history would neglect. Their goal was to create a memorial for those who had died of AIDS, and to thereby help people understand the devastating impact of the disease. This meeting of devoted friends and lovers served as the foundation of the NAMES Project AIDS Memorial Quilt.

Cleve created the first panel for the AIDS Memorial Quilt in memory of his friend Marvin Feldman. In June of 1987, Jones teamed up with Mike Smith, Gert McMullin and several others to formally organize the NAMES Project Foundation.

Public response to the Quilt was immediate. People in the U.S. cities most affected by AIDS — Atlanta, New York, Los Angeles and San Francisco — sent panels to the San Francisco workshop. Generous donors rapidly supplied sewing machines, equipment and other materials, and many volunteered tirelessly.

On October 11, 1987, the Quilt was displayed for the first time on the National Mall in Washington, D.C., during the National March on Washington for Lesbian and Gay Rights. It covered a space larger than a football field and included 1,920 panels. Six teams of eight volunteers ceremonially unfolded the Quilt sections at sunrise as celebrities, politicians, families, lovers and friends read aloud the 1,920 names of the people represented in Quilt. The reading of names is now a tradition followed at nearly every Quilt display. Half a million people visited the Quilt that weekend.

The overwhelming response to the Quilt’s inaugural display led to a four-month, 20-city, national tour for the Quilt in the spring and summer of 1988. The tour raised nearly $500,000 for hundreds of AIDS service organizations. More than 9,000 volunteers across the country helped the seven-person traveling crew move and display the Quilt. Local panels were added in each city, tripling the Quilt’s size to more than 6,000 panels by the end of the tour.

The Quilt returned to Washington, D.C. in October of 1988, when 8,288 panels were displayed on the Ellipse in front of the White House.

With a small seed grant from the World Health Organization, Quilt organizers travelled to eight countries to mark the first World AIDS Day on December 1, 1988 with simultaneous displays broadcast from six continents.  Throughout 1989, more than 20 countries launched similar commemorative projects based on the Quilt.  Cleve Jones, Mike Smith and the NAMES Project Foundation were nominated for the 1989 Nobel Peace Prize in recognition of the global impact of the Quilt.

In 1989 a second tour of North America brought the Quilt to 19 additional cities in the United States and Canada. That tour and other 1989 displays raised nearly a quarter of a million dollars for AIDS service organizations. In October of that year, the Quilt (now more than 12,000 panels in size) was again displayed on the Ellipse in Washington, D.C.  HBO released their documentary film on the Quilt, Common Threads: Stories from the Quilt, which brought the Quilt’s message to millions of movie-goers. The film won the Academy Award for Best Documentary of 1989.

By 1992, the AIDS Memorial Quilt included panels from every state and 28 countries. In October 1992, the entire Quilt returned to the National Mall in Washington, D.C.  In January 1993, the NAMES Project was invited to march in President Clinton’s inaugural parade where over 200 volunteers carried Quilt panels down Pennsylvania Avenue.

The last display of the entire AIDS Memorial Quilt was in October of 1996 when the Quilt covered the entire National Mall in Washington, D.C. with an estimated 1.2 million people coming to view it.  The Clintons and Gores attended the display, marking the first visit by a sitting president of the United States.

In 2000, the Board of Directors of The NAMES Project elected to move the Foundation’s national headquarters from San Francisco to Atlanta. The cross-country move was made to shore up the Foundation’s finances and to be in a better position to address the changing face of HIV/AIDS.

In 2004, more than 8,000 of the newest panels that had been received at or since October 1996 display were shown on The Eclipse in Washington, D.C. in observance of National HIV Testing Day.

In 2012, as part of the 25th anniversary of the NAMES Project Foundation, the Quilt returned to Washington, DC as part of a collaboration with the Smithsonian Museum’s American Folklife Festival, where the entire Quilt was displayed on the National Mall over the course of a two-week period with 1,500 blocks of panels being displayed each day.  Given the size of the Quilt, it is now too large to be displayed all at once on the Mall.  The International AIDS Conference was held in Washington DC immediately following the display, in which the Quilt was a major feature, with displays in more than 60 locations throughout the D.C. metro area.

In 2013, as part of ongoing awareness and educational efforts, a special Quilt program, Call My Name, was created to draw attention to HIV/AIDS in the Black community and the public health crisis that still exists today. The program aims to create a greater number of Quilt panels that reflect the impact of HIV/AIDS within the Black community and the effect stigma and prejudice have on increased infection rates. A national tour followed that included hosting panel-making workshops organized by Black churches and community groups to make panels and raiser greater awareness of on the HIV/AIDS crisis in the African American community.

In November 2019, the National AIDS Memorial became the permanent caretaker and steward of the Quilt, returning it to San Francisco, where its story began during the height of the AIDS epidemic.  At that time, the Quilt’s archival collection of 200,000 objects, documents, cards and letters that chronicle the lives remembered in it were transferred to the prestigious American Folklife Center at the Library of Congress, making this collection available through the world’s largest public library.  This announcement, made at the Library of Congress in Washington, DC, featured special guests House Speaker Nancy Pelosi, Representatives John Lewis and Barbara Lee, who recognized the Quilt as a national treasure that must be preserved for its ability to teach for generations to come.  See the news release announcement.

Gilead Sciences provided a $2.4 million grant the the National AIDS Memorial to relocate the Quilt from Atlanta back to the San Francisco Bay Area where is was created. The first Quilt panels arrived in January 2020.

Each year, the National AIDS Memorial works with hundreds of partners across the country to orchestrate more than 1,000 displays in schools, universities, places of worship, corporations and community centers. On World AIDS Day, December 1st, more than 1/2 of the Quilt goes on display around the nation.

Through a 20-year partnership with AIDS Quilt Touch, the Quilt can be displayed in its entirety interactively so millions of people around the world can experience it’s stories. The Quilt has also been the subject of countless books, films, scholarly papers, articles, and theatrical, artistic and musical performances.

Forty years into the pandemic more than 700,000 lives in the U.S. have been lost to AIDS and more than 1.1 million people live with HIV and an estimated 1 in 7 people do not know they have HIV.  In the last figures reported in 2018, Black/African American gay and bisexual men account for the largest number of new HIV diagnoses.

Panel making remains an important element of the Quilt, as new panels continue to be made. Today, the AIDS Memorial Quilt is an epic 54-ton tapestry that includes nearly 50,000 panels dedicated to more than 105,000 individuals. It is the premiere symbol of the AIDS pandemic, a living memorial to a generation lost to AIDS and an important HIV prevention education tool. With hundreds of thousands of people contributing their talents to making the memorial panels, and tens of thousands of volunteers to help display it, the Quilt is considered the largest community arts project in history.

“It was gentle rain, no speeches or music, just thousands of people reading these names on this patchwork of placards up on that wall. And I thought to myself, It looks like some kind of quilt,’ and when I said the word "quilt" I thought of my great-grandma. ... And it was such a warm and comforting and middle-American traditional-family-values sort of symbol, and I thought, ‘This is the symbol we should take.’”

The Quilt and many of its panels are nearly 35 years old. Please help ensure that every panel is protected and preserved and that each story can forever be told to future generations.

In appreciation to our Quilt Partners 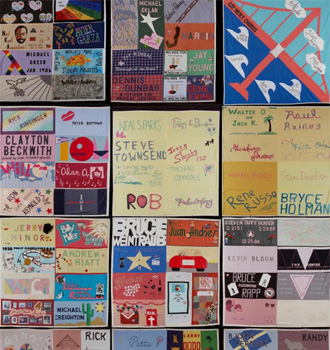 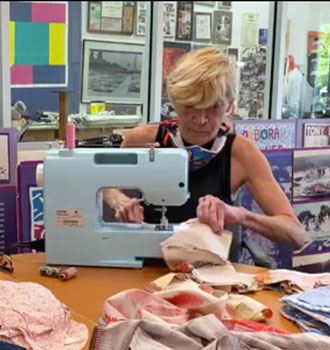 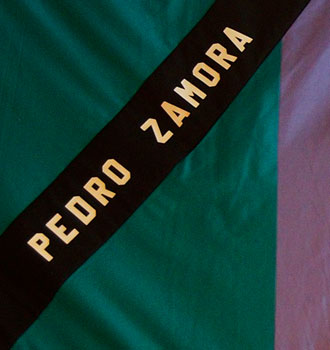